One Year Later: How NASA Turned Me into a Space Geek

It’s not that I was never interested in space.  I mean, who doesn’t like the audacity of man to put stuff/humans on top of an enormous cylinder full of fuel and explode it/them into space?  I’m an aviation guy and love watching enormous planes land and take off, space is just a bigger and grander version of that.

In early 2020, I saw a tweet about applications for something called NASA Social, where people would go behind-the-scenes at Kennedy Space Center in Florida in the days preceding a resupply mission to the International Space Station.  “Hey, why not?” I thought to myself as I applied.  I figured my blog following would hopefully be impressive enough to get me some consideration.  I’m not sure the reason, but in early February 2020 I received an email that would literally change my life.

I was in!  I had no idea what to expect but was incredibly excited.  It was a story I wanted to cover well, to the point that I even canceled a trip to New Zealand to make it work for my schedule.

I’ll never forget something which was said at our introductory session, “You’re here because we want you to talk about space.”  Job well done, NASA.

Today marks the anniversary of Day One of my NASA Social trip (which was slightly delayed from the dates in the screenshot above).  Little did I know what the next year would have in store for me!

If you’d like to see my NASA Social writeups in their entirety, I’ll post the links here

The NASA Social trip for the CRS-20 mission started with us learning about the science behind some of the myriad experiments going up to the International Space Station the next day.  We got to hear from actual scientists, many of whom had legit beards about mind-bending stuff like the challenges of growing plants in space, where there is no capillary pressure.

As part of the visit we made our way to the Space Station Processing Facility, the production facility in charge of preparing items for delivery to the ISS.  Oh, it’s also the home of the astronaut quarantine quarters before they head off into space.  We all got to take turns getting pictures at the doorway the astronauts used on their way to space. 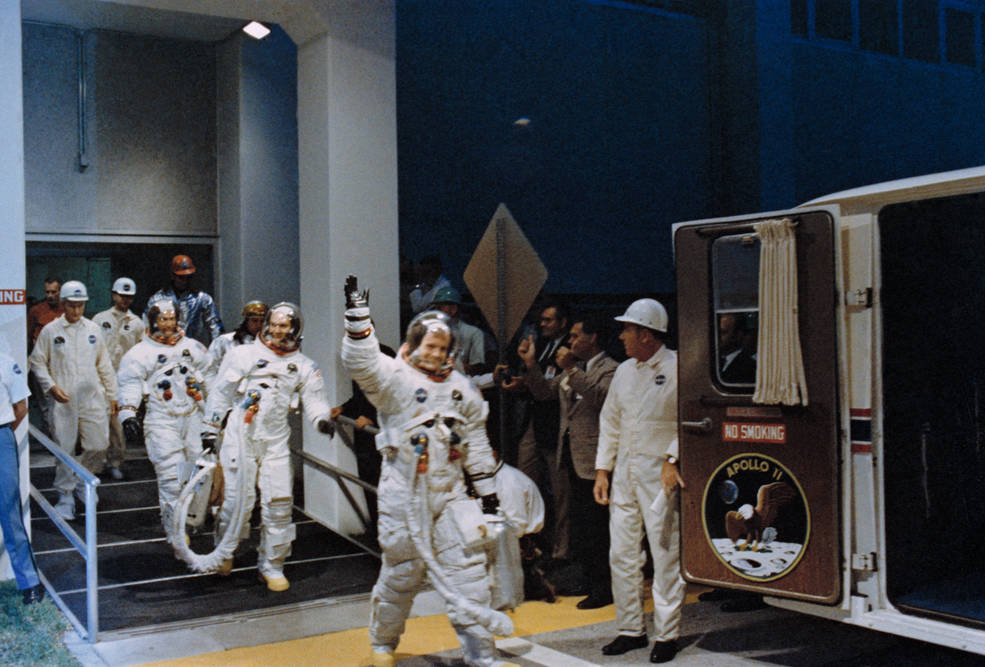 And we got to see the coolest parking spot in the world.

We then put our Press Hats on and went to the official NASA press conference covering some of the science going up to the station.  We heard about all manner of science, from an Emory University experiment investigating cardiomyocyte production in low-Earth orbit all the way to a Delta Faucet experiment about microdroplet formation in reduced gravity.  Not only was the science super interesting, but it was also humbling and inspiring seeing just how passionate and proud everyone was to share their work with the world.

Oh, and the press conference took place at the Kennedy Center Press Complex, from which space launches have been covered for the last 70 years.  That’s something I learned about space: every place we walked, we felt the footsteps of those who had been there for us.  As surely as every astronaut thinks of Alan Shepherd while they’re waiting to launch, I thought of Walter Cronkite saying, “the building is shaking!” as I walked around the press complex.

Oh, including THE SPACE SHUTTLE.

So the day started off great and then got even better, as we went to the largest single-story building in the world: the NASA Vehicle Assembly Building

538 feet tall, and rumored to be so tall that clouds would form at the top of the building, the VAB was memorable because that’s where the Saturn V rockets and Space Shuttle were assembled before making their way to the launch pad.

At one point, someone asked me if I knew the significance of where I happened to be standing.  They then informed me that the red dot at my feet was where they lined the space shuttle up to be mated to its fuel tank.

We then visited an actual launch pad.  From where things had been blasted into space.  And we got to walk on it and everything.

We saw the enormous flame trench (which would be a great name for a heavy metal band) which diverted flames away from the bottom of the rocket to make sure they didn’t bounce back and burn the whole thing up.

As we prepared to leave we saw the pathway the mobile crawlers used to deliver their rockets to the launch pad.  To think of the stories these paths could tell.

But then we got to visit the rocket.

It was a SpaceX Falcon 9 rocket with a Cargo Dragon capsule fitted to the top.  It was just sitting there, a few hundred yards away.  I couldn’t appreciate just how big that rocket was until I was next to it.

Later that night, we went back to the Press Complex, just five or so miles from the launch pad, to watch CRS-20 make its way into space.  As amazing as the images turned out, nothing compared to the spectacle of actually being there.  I felt the launch as much as I heard it.  It was powerful, awe-inspiring, and my fellow NASA Socialites all lost their minds whooping and hollering around me.

As I got back to Texas and the world began to shut down, I began reading all manner of space publications.  SpaceX sure helped by launching many more Falcon 9 rockets in the meantime.  I knew that SpaceX had a crewed mission coming up: Demo-2, the first time American astronauts would be launching from American soil since 2011, on a demonstration mission to the International Space Station.

I was sitting at the house thinking about the mission the day before it was supposed to launch when I got a text from a NASA Social buddy, “Hey a spot opened up on a boat for the launch, you in?”

Yes.  I hopped in my Tesla, which I considered appropriate for the occasion (especially since air travel was still very sparse at the time) and drove 20 hours to Cape Canaveral.  We got in place…and then the launch scrubbed due to weather.  Not to be deterred, we all decided to stay in town until the launch.  In the meantime, some friends and I chartered a helicopter and flew over Kennedy Space Center, including a flight over the space shuttle landing runway!

We started launch day by taking a boat over to the launch pad (before the exclusion zone came into effect) for some pictures of the rocket.

As we tried for better pictures the NASA Huey flew by (complete with door gunner), assuredly to see what we were up to.

We made our way to Banana Creek for an absolutely perfect view of the launch.  The weather was looking ominous, but about 20 minutes before launch it all seemed to clear up and launch was a go!

I will never forget that moment as long as I live.  I even shed a manly tear or two.  And it meant a lot getting to share it with some great friends.

After a scrubbed additional trip out to Florida to watch a Delta IV Heavy rocket launch, and constant chit-chat on WhatsApp with a few NASA Social buddies, I decided to head down to south Texas to see SpaceX’s new Starship.  It was crazy to me that driving down to Boca Chica from Dallas took half as long as driving to Cape Canaveral!

There simply aren’t words for Starship.  It looks enormous as it does unlikely.  It was amazing that some built basically in a tent a few miles down the road was going to fly to Mars in a few years.  It’s hard to give you a perspective for how huge the Starship is, but it’s basically as tall as the Space Shuttle with its big orange fuel tank.  And it’s going to be stacked on top of a Super Heavy booster that’s even taller, the combo will be roughly 400 feet tall!

Even crazier was the fact that these were being built literally next to SH4 in South Texas, you could drive right by the construction site and the factory down the road!

The Starship prototype I saw met a fiery end after an absolutely incredible first test flight.

SpaceX was undeterred by the ending of SN8 and SN9 and just this week landed Starship SN10!  I mean yes technically it blew up a few minutes later, but they still landed it!

How all of this is thanks to NASA

I keep going back to what I heard on that first day of NASA Social, back when people were around each other without masks and before the world changed just a few weeks later.  “You’re here because we want you to talk about space.”  NASA did a wonderful job of it.  More than just talking about space, NASA Social stoked my curiosity about space.  Great content creators like Everyday Astronaut helped me learn more about it, and private companies like SpaceX are paving the way for the future, alongside other companies like ULA and Blue Origin, with NASA’s help.

But NASA put my little introverted self around some of the kindest and wonderful people I’ve ever met and I felt safe being stupid and asking dumb questions.  Before I received that acceptance email from NASA Social I never would’ve imagined that the next year of my life would involve so much space!  I’m so glad it did, though.  Not just for the inspiration and audacity of space flight and what we learn from it back here on earth, but getting to learn more about it with some amazing friends.

Thank you NASA, and godspeed to all the thousands of women and men who have dedicated their lives to the audacious pursuit of strapping science and humans on top of rockets and blasting them into space!